Peter Gordon writes up his experience of Euro 2004 from an England fan’s perspective.

I’d always wanted to do one mad tournament in my life and Portugal seemed the perfect place to do it. Cheap, nice weather and easily accessible, my 6th football tournament filled all the criteria to get to as many games in as short a time as possible.

I started off by attending the LondonEnglandfans/British Council ‘Welcome to Lisbon’ forum only an hour and a quarter after landing in Lisbon. That proved to be a great night.

The next morning I was up bright and early to buy my rail pass and catch the 08.55 to Porto for the opening match. Three and a half hours on the train and I didn’t have a match ticket, I just wanted to enjoy the festivities and then watch the game in a bar somewhere.

A stroke of luck. As I sat chatting with three English lads near the ground an American tout came up and offered us 4 Category 3 tickets at face value. I was in for the opening game! In the Greece end! Wearing a Portugal shirt! No problems, a great day and a big shock with Greece winning. A complete fluke surely!

Back to Lisbon that night and I stumbled into one of the best street parties I’ve ever attended. The feast of Santa Antonia. Absolute quality. I met up with 2 friends who’d flown in that day, Harry Foges and Matt Allen, and my tournament was well and truly up and running.

The following day was England v France and the chaos outside the ground, with the ridiculously bad organisation, was matched only by the chaos in the last 2 minutes of the game as France turned the result around. A few post match beers dulled the pain.

On to Guimaraes for a four and a half hour train journey via Porto the next day for an uneventful Denmark v Italyand then Porto the day after for the big one, Holland v Germany. Great pre-match atmosphere in town with Holland outnumbering the Germans by about 4-1 as they played out a 1-1 draw. Harry joined me for my first overnight train back to Lisbon. 00.50hrs it left Porto and it crawled back into Lisbon at 05.30 hrs. Nice! Shower then straight to bed for 4 hours.

A nice day in Lisbon now as Harry and I see Portugal v Russia at the Luz. Portugal win and afterwards we meet Matt in town and join in with the mad celebrations in Rossio Square until the early hours.

Wednesday 17th. Early train up to Coimbra to see England v Switzerland and meet up with friends, Jon Darrington and his girlfriend Toni McBurnie. A good win in the hot sun and a nice sleep on the train back. Another late night celebrating.

Following morning, 07.55 train to Braga for a 4 hour trip to the furthest northern city being used for Euro 2004, to see Denmark-Bulgaria. Braga is a beautiful city and the ground was breathtaking, having being cut into a large hill. Astonishing!

Overnight train home, shower, no bed because I’m off back up north on a two-and-a-half hour journey to Aviero to see the match of the tournament, Czech Republic v Holland. 3-2 to the Czechs. What a game!

No overnight train, I’m disorientated due to all the travelling and I’ve forgotten that as the game took place on Saturday it’s now Sunday morning and the overnight train doesn’t run on Sundays. Schoolboy error. What a fool!

Stayed up all night in a bar that reminded me of that pub in ‘Boys from the Blackstuff’. Some very strange people residing there. Get the first available train back to Lisbon the next morning and get to the hotel at about midday for a shower.

Sunday 20th. Can’t go to bed on a day like this. It’s Portugal v Spain and I’ve got a ticket. Great game, great atmosphere. Portugal win and more mad celebrations as I meet up in Rossio Square with Harry and Matt. Get to bed at about 3am I think?

Monday 21st. Now the big one. England v Croatia. England fans take over the city again but first I’m off to the Nuno Goncalves Secondary School in Lisbon for a visit with LondonEnglandfans and the British Council. It was brilliant, the pupils loved us and for some reason they all wanted our autographs. I really enjoyed my time there and they truly were great kids.

Metro journey to the ground is a nightmare as myself, Jon, Toni and Christian, our Croatian friend are crushed like sardines in the carriage. Disaster as we leave the train and Christian realises someone’s nicked his wallet with his money and more importantly his match ticket. Jon, Toni and I club together and get him one outside the station for 90 euros. That night England beat Croatia 4-2 and I stay up singing with Harry and Matt in the city centre until about 3am. I need my bed.

Following morning, 08.55 train to Porto, regional train to Guimaraes and Italy v Bulgaria. Jon Darrington, Toni and Christian join me later as they drove up from their campsite.

They bring bad news, a young England fan has been murdered, (Stephen Smith R.I.P), at about 4.30am in Lisbon that morning. I later find out it had been about 50 yards from where I’d been drinking that morning. This puts a downer on the rest of the day and the game and car journey home are quite subdued.

I arrive back in Rossio Square at about 3am and see the shrine to Stephen Smith. At this time of night it is surrounded by lit candles and is an eerily emotional tribute to our fellow supporter. I go to bed with a really strange feeling that I can’t quite describe…

My final group game is Germany v Czech Republic. I buy a paper. It’s June 23rd. I suddenly realise it’s my birthday. My itinerary made me lose track of what day it was. Jon Darrington embarrasses me before the game in a bar by arranging for a small cake and a candle to be delivered to our table as they all sing Happy Birthday. Cheers Jon!

Czechs win and Germany are out. Shame! I meet up with Harry and Mat down at the Docas bars and we speculate on the following days game v Portugal in the Quarter-Finals.

Thursday 24th. Match day. England everywhere. I relieve the tension by going off on my own and visiting the castle in the morning. Nice and peaceful up there. In the stadium it looks like we’ve outnumbered their fans in their own stadium. Unbelievable!!

You all saw the game. I’m slowly getting over it. That’s how it goes. Back into town. Drink with Harry and Matt till 4.30am. Try to cheer ourselves up. Fail miserably.

Next day. Greece v France. I have no ticket but get one for 25 euros outside the train station next to Alvalade Stadium. Result. Greece 1 – France 0. I feel a bit better. Back to the Docas with Harry and Matt. We say our goodbyes as they are flying home from Faro in 2 days but our experiences of the past 2 weeks will ensure a life-long friendship. Cheers lads.

The next day is my first free day since I got here. I go to the Fan Park and watch Holland put Sweden out. Back into town. I’m now on my own. Depressed. Have a couple of beers and then home.

Following day. My last game. 08.55 train to Porto (I’ll miss it) and say goodbye to Porto as I see the Czechs beat the Danes. Overnight train back to Lisbon (I won’t miss that) and bed for 3 hours. Get up and visit the aquarium at the old Expo 98 site (what was Expo 98?), where I see Milan Baros and his girlfriend.

Fly home the next day having said goodbye to our bar owner friend halfway up the Bairro Alto, who we’d got to know quite well.

That was it folks!!!

Back to work and back to watching the rest of the tournament on the television.

My cat was pleased to see me.

You did your best with the tournament and I’ll never forget that… Roll on Germany… 2006!! 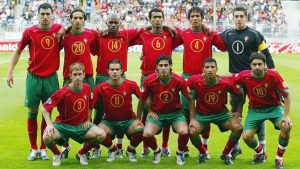