This article was written in 2004 when Wayne Rooney was just starting out. It is interesting to see what this writer thought about him back then and how he has held up.

Wayne Rooney has made the headlines as the newest star of English football. But, writes Victoria Shaw, he lacks the glamour required to become an international icon

It’s early evening in a quiet Liverpool suburb. Between a boarded-up pub and a closed-down video store, a young boy kicks a football about on a bald patch of grass. Fast-forward ten years and fans cheer as the same boy emerges from a stadium in Portugal. At just 18, Wayne Rooney has risen from the streets of Liverpool to become a legend on the European sporting stage.

In 2003, he made history as the youngest player to score for England and his goals in England’s Euro 2004 win against Switzerland made him the youngest scorer ever in the Championship. His name has dominated the British newspapers and many commentators think he could even replace David Beckham as the king of football.

Like Beckham, Rooney always dreamed of becoming a famous footballer. Beckham was 11 when he tried for Manchester United, but Rooney was spotted at the tender age of eight. At his trial for Everton FC’s Bellefield training academy, the timid little boy’ made a huge impression. Watching Rooney showing off his ball skills, the scout trembled with excitement. His tea was spilling all over the place,’ recalls the academy director.

Rooney’s parents loyal Everton fans  were delighted when he was taken into the academy. At under-15 level, he was playing for the under-19s and by the age of 16, he was playing with the professionals. Now Rooney has made it to the very top of the game, earning £2 million a year in commercial deals on top of his £13,000-a-week wages from Everton.

So far, success has not made a great impact on Rooney’s personal life. He drives an inexpensive car and lives in an ordinary house with his girlfriend. He has stayed close to his family and the neighbourhood in which he grew up. While Beckham moved away from home to play for Manchester United, Rooney was content to stick with his local team Everton.

When he first played for the Everton first team, his earnings were only £90 a week. After scoring against Arsenal, he famously returned home to play football in the street with his old friends. His down-to-earth personality and rugged looks, have made him a favorite with the British public. Beckham’s image is more international,’ says sports marketing specialist Nigel Currie, while with Rooney, you could imagine him slogging it out in Liverpool on a wet Thursday night. He appeals to the British mind.’

So could Rooney soar beyond British stardom and replace Beckham as the world’s football icon? It seems unlikely. Essentially, it’s Beckham’s good looks and pop-star partner that have propelled him to international superstardom. Rooney, on the other hand, has neither of these. As one commentator put it, Rooney would be lucky to sell potatoes with his face. I think he’s probably more popular with boys than girls,’ said a fan, and maybe people who listen to games on the radio.’

Perhaps it’s for the best. Much has been made of the potential for great fame to ruin football’s most gifted players. Many have described Rooney as a younger version of Paul Gascoigne, the brilliant England star whose career was destroyed by his dependence on drink.

Gascoigne says that he barely touched alcohol until he became famous. Then, almost overnight, his lifestyle changed. He released a pop single, was named Best Dressed Man of the Year and drank for free in all the best London hotels. Before long, Gascoigne had become an alcoholic and his talent crumbled. 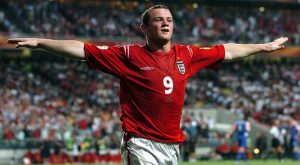