For many years, research on children’s development and well-being has focused almost exclusively on what happens between children and their mothers. But some recent research has begun to focus on the importance of ‘quality time’ between fathers and children, and the potential benefits this has for mental health in later life.

One study has associated good father-child relationships with an absence of emotional and behavioural difficulties in adolescence and greater academic motivation. Boys who have involved fathers are shown to be less likely to be in trouble with the police as they grew older. Correspondingly, in families where there is little or no involvement with a father, there may be a marked increase in behavioural disorders, psychiatric diagnosis and suicide.

So, how do we help develop relationships between fathers and their children in this stress-filled, time-conscious world? It may well be that a regular piece of parental quality time is to be found alive and kicking in one of the least likely but most obvious parts of our society – watching football.

An ongoing study with fans from Mansfield Town FC (the Stags) suggests a great deal that is constructive about the big match. It shows how men, especially, use the game to discharge frustration and anger in an arena where nobody actually comes to blows or gets hurt. The shared language of the terraces and knowledge of the game appear to help build and maintain relationships irrespective of class, occupation, wealth or status outside of the ground.

The interviews also reveal that almost every fan was taken to their first match by their father. These early experiences resonate with a feeling of being old enough to enjoy and appreciate the game, and of spending time with their fathers that was both sacrosanct and expected. This was time deliberately set aside for a shared experience that would generate conversation between parent and child – the hallmark of ‘quality time’.

In our society, the opportunities for this to happen are diminishing every day. Football terraces, on the other hand, offer a rare opportunity for conversations that cut across class, race and, importantly, age barriers. They offer a forum where a child’s view about whether England could win the next European Championships can be treated with as much respect as that of adult.

This much-sought-after ‘quality time’ for parents and their children, found in unlikely places with names such as Mansfield Town, Doncaster Rovers, Cardiff City or even Accrington Stanley, often continues after the children are grown up and frequently well into the time when these children have children of their own. As one fan, now in his 30s, put it: ‘It’s something I like to do with my dad, and it’s an escape back to old times. And really what else would me and my dad do together?’

So, if we want to help develop father-child relationships that appear to impact on the mental health of children in later life, one small but perhaps significant step in the right direction may well be this perfectly ordinary occurrence seen up and down the country every week. 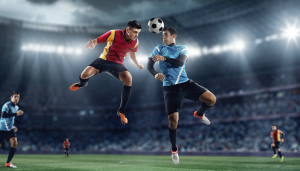