No doubt Zinedine Zidane was one of the best players ever to play for France and his legacy is still in the making as coach of Real Madrid. Here is a review of him from 2002 that we found in archive.org on an expired soccer website, so we thought we should bring in back to life.

France Football magazine has just invented a new super hero. From newsstands on every street corner, fist thrust into the air, the balding caped crusader stares out at you: “Super Zidane!”

So the sporting saviour of the country which in 2002 gave the right wing politician Jean Marie Le Pen nearly twenty percent of the vote is himself the son of Algerian immigrants. The paradox of modern day France in a football shaped nutshell.

You might think that Zidane’s status would lead to ideological problems for Le Pen supporters, but not so. Patrice is a member of the Boulogne Boys, the infamously extreme right wing Ultras from Paris St Germain (PSG). He voted for Le Pen in both rounds of the elections because “things need to change”, but in the World Cup he’ll be screaming the name of Zidane until his face is as blue as his shirt: “Zidane is different. I don’t have a problem with people like him. He is French, he has a French wife, he is not ‘une racaille.’” “Racailles” is the pejorative term used to describe the boys from the suburbs who Patrice sees as the embodiment of France’s problems.

This distinction explains why players such as Nicolas Anelka and Peter Luccin quickly became hate figures for the Boulogne Boys, while Zidane is a hero of the national side. Patrice sums up his opinion: “Zidane speaks like a Frenchman, Anelka doesn’t. I don’t think of him as one of the immigrants, he is one of us.”

David is also a PSG fan. He doesn’t sit with the Boulogne Boys. As an immigrant from Senegal he doesn’t think it would be the most intelligent thing to do: “Zidane would probably be OK, though, he is a hero, he is above race. They see him as a good example of integration. He’s a lot older than the guys who cause problems. It’s a different image.”

Lilian Thuram openly spoke out against racism, and turned down an offer from Lazio, because he “could never play for a club like that.”

In contrast, Zidane doesn’t volunteer views on race or religion, but answers questions without controversy: he supported Chirac against Le Pen in the second round of the presidential elections, but on the basis of determined and yet understated views about maintaining stability. His frequently stated hatred of publicity turns him away from the political limelight.

The first round of presidential elections highlighted the racial divide which lies at the heart of modern day France, and the country needs a hero. The people thank the stars for Zidane’s talent, and that it belongs to them. After scoring the goal which won the European Cup for Real Madrid, he was the front-page star of the L’Equipe sports newspaper for three days in a row. The whole country prayed for him and his wife Veronique as they awaited the birth of their third child. He is accepted by everyone and is unquestionably the most respected person in France, even more so than the legendary charity worker L’Abbé Pierre.

For immigrants like David, the strong support for Le Pen exposed the cultural revolution of the World Cup 98 as little more than marketing spin, but even he feels that a strong World Cup from France and its superhero could really change things. A successful French team drawn from all sections of society can at least change the talk away from krypto-facism, and more towards Zidane’s very own version of kryptonite. 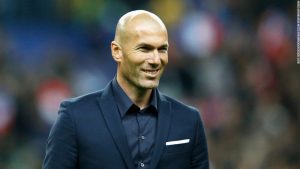