Football is football all over the world. But the experience can be quite different depending on what country you are in. Graham Jamieson tells us about his experience of Portuguese football – comparing it with his experiences of match day in the UK.

Tickets. Surprisingly, it is quite easy to get tickets – even for the big games like Benfica / Sporting. You go along to the ground midweek, pay your money, and – hey presto! – you have your “entradas” – nothing like the UK where you have to pull in a few favours, or need to be a season ticket holder.

Obviously the weather is good in Portugal, so before most games, the fans go along to the ground early for a few beers and “bifanas” (a thin slice of pork with mustard, in a roll). There are lots of wee stands outside the grounds selling refreshments before and after the game. The one thing you’ll notice is that there is no segragation of fans – even for derby games. The fans mix happily together. (In the same family, some are for Sporting , some for Benfica.)

So after your snack and chat with the others, off you go to buy your programme for the game. No. They don’t have programmes for normal league games. I did get one once for the Boavista / Celtic UEFA cup semi final up in Porto, but apart from this one game, I have never seen a programme for Portuguese games and this includes Sporting and Benfica.

So in you go and take your seat. 80,000 people. Benfica / Sporting. The atmosphere is going to be fantastic… er…, no. They don’t sing. They have big flags, the odd firework, they bang their drums – but that’s about it. They do sing occasionally – but they sing different songs at the same time, even though they are supporting the same team. It must be said that the old stadiums were so vast that any noise actually made, just escaped upwards and out (they had no roofs). But here’s hoping the atmosphere will be better in the new stadiums.

As for the spectacle itself, here’s my opinion. It is fair to say that the majority of the best Portuguese players don’t actually play in Portugal any more. The referees are not the best. The players spend a long time rolling around on the grass in absolute agony, then manage to run it off two minutes later. It can be a bit of a soap opera at times. They over react to the slightest little thing. And every year either Benfica, Sporting or Porto win (there was a pleasant surprise a few years ago when Boavista shocked everyone).

But even if the game could be better, there are always more beers and bifanas after the final whistle when all the incidents – and there will be incidents – can be discussed at great length (a Portuguese pastime).

This all sounds a bit negative, but I do enjoy going to the football here. It is nice to know you are not going to be pissed on (in both meanings of the word); that you can get a beer outside the ground no problem (please note this is probably not the case during Euro 2004) and that some idiot is not going to want to fight you. However, having said that all that, I do occasionally pine for a good old Rangers/Celtic game. 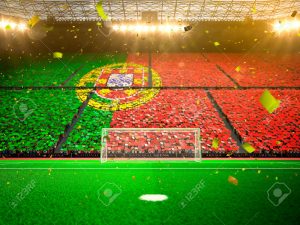